Abbotsford men Division 2 traveled to Hume Park on what was a brilliant day in the sunshine.  The club on a whole is still seeking that perfect day when all 60+ registered players show up at the same time.  The 2’s had 2 subs at their disposal and knew it was going to be a long day at the office without many reinforcements.  United started well, using their large forward pack to work their way downfield and score to open the game.  Abbotsford struck back using good structure and nice interplay between backs and forwards to get a score of their own.  After some sustained possession, United was able to work it through the hands and dotted down in the corner.  United struck again after Abbotsford lost the ball in contact and their hard running left winger took advantage as he scampered 60 meters to score.  Just before half, after some sustained play, centre, Josh Long cut through and sent winger, Cody Brownell into the corner for an unconverted try.

The second half saw Abbotsford start quick as Colten Lee pounced on a loose ball to score immediately after the opening whistle.  Abbotsford continued to press hard but lost another ball in contact which United moved to sideline and their outside backs strung together some nice phases to score under the posts.  The 2’s went right back down the field and continued to press as they put winger Israelson into the corner, followed by Adams scoring another in the corner before Keegan Carson cut through the United midfield to round out the Abbotsford scoring.  United, to their credit battled back and were within a try.  It all came down to the final scrum on the Abbotsford 5meter line.  The Abbotsford scrum had been going backwards all day but after a pep-talk by coach Chambers, they secured their own ball, kicked it out and celebrated a big win.

Abbotsford Div 1. came to United looking to get back to their winning ways.  Although undermanned they played a solid game against a United team that was threatening on attack all day.  United started well and had a significant amount of possession that they turned into an early 3 points.  After a missed Abbotsford penalty, the resulting 22m dropout was blocked by Abbotsford and scooped up by industrious prop, Brent Bradbury.  At the break, the teams were tight.  Not much separated the two teams.

United started the second half with a well-earned try after a nice off load by their fullback which put their speedy winger down the sideline for a nice try.  Abbotsford struck right back after centre, Bryce Hewko sliced through the United defence to dot down under the posts.  Another Abbotsford try followed when Berto Imbriani powered over the line and over top of a few United defenders to score a great try.  United showed great fight and went ahead with 15 minutes to go after scoring a couple nice tries.  Abbotsford needed something to go their way and they found it when speedy winger Darwin Guevara intercepted a United pass to score a long distance try.  Shortly after, Abbotsford worked their way downfield to score a nice team try when Connor Hunter snuck over the line to put the finishing touches on an Abbotsford win.  Credit to both United teams who made Abbotsford work very hard for both wins.  Thanks to the refs and to the United teams for great post-match festivities.  Abbotsford host Port Alberni and Langley next week.

The Lady Griffins hosted teams from ridge meadows,Kamloops and Bayside this past weekend at Ex Park. The day was very successful for the youth girls club teams with only three losses between 6 ARFC teams playing at least 3 games each in a 7’s style tournament.

Our U14’s were undefeated once again with super speedy back Samantha Fiskar scoring 7 tries in just 3 games !

Our U16 division boasted three teams.

The A team has yet to lose all season and on Sunday outscored their opponents 125-0 with the help from Paris Mastin touching down 6 tries in four games.

Both B teams were also very successful just losing one game to each other. The strong running from forward Sophia Peters put 5 tries on the scoreboard for her team while Sarah Willis scored four tries for her team with her wicked step.

The U19 B team had some tough competition but pulled through with a tie and a win and one loss. It was nice to welcome back Veteran Sammi Thiessen who is always working hard on the pitch. Sammi scored 3 tries to help her team come back when they were down.

Last but not least the U19 A team was once again undefeated. Some incredible athletes on this squad proving to be more athletic then their opponents especially when it came to Kira Katan. The grade 12 athlete has a lot of speed and agility. She scored 20 points in tries  for her team in just three games !!

The ladies are looking forward to this weekend in Kamloops for the BC Provincials for the 7’s series and are expected to do very well.

We started well... getting out to a quick lead but then they started to throw some unnecessary passes and let them back in the game. Halftime score was 15-13.  Second half the boys eliminated the bad passes and played high percentage rugby. Every player did their job and in the end the boys ran away with it. Final score. Abby 63-13 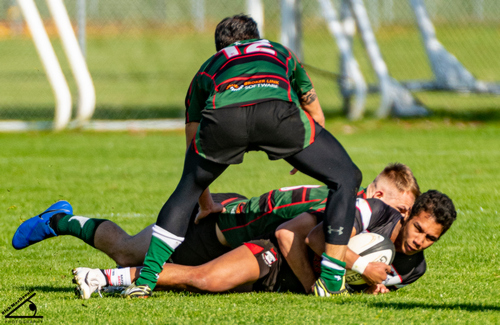 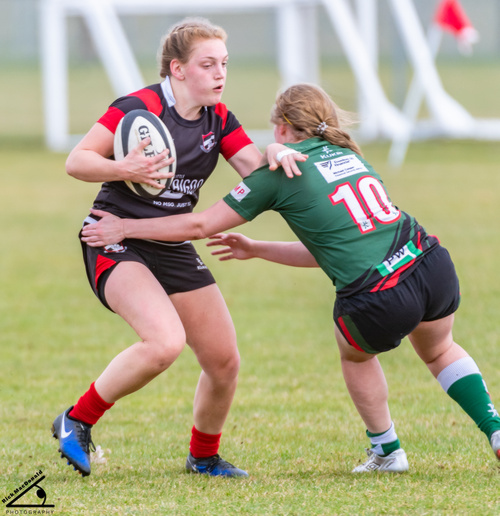